China and Pakistan are all-weather strategic partners. The two countries have formed a rock-solid friendship.

The China-Pakistan Economic Corridor (CPEC) is a landmark project of the co-construction of the “Belt and Road Initiative” by China and Pakistan, and an important manifestation of the ever-growing “Iron-clad Friendship” between the two countries. 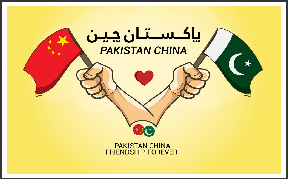 The CPEC is of over 3000 kilometers, it is a bond, connecting the Silk Road Economic Belt to the north and the 21st Century Maritime Silk Road to the south.

While building a bridge for economic and trade exchanges between China and Pakistan, the CPEC is also constantly enriching the connotation of a China-Pakistan community with a shared future.

In 2013, the CPEC was formally proposed and positioned as a “Four-sphere Integrated” channel and a trade corridor covering roads, railways, oil and gas pipelines, and fiber-optic cables; in 2015, the “1+4” cooperation layout was formed with the construction of the corridor as the center, with emphasis on Gwadar port, energy, infrastructure and industrial cooperation.

In December 2017, the “China-Pakistan Economic Corridor Vision (2030)” was officially released, dovetailing China’s “Belt and Road Initiative” and Pakistan’s “Vision 2025”, with a focus on development in areas including connectivity, energy, trade and industrial parks.

As of September 2021, the 22 priority projects from the first phase of the CPEC are almost complete, half of which are energy projects. For example, the Port Qasim coal-fired power station, since it entered commercial operation in April 2018, has generated about 10% of the power supply of Pakistan’s national grid.

It is reported that the coal-fired power station will exceed 4.6 billion kWh in 2021. While accelerating its construction as a power supply base, the CPEC also attaches great importance to the development of clean energy.

In November 2021, the Karot Hydropower Station, the first hydropower investment project under the CPEC, has successfully completed the closure of its diversion tunnel and officially started storing water in the reservoir, laying a foundation for the commissioning of subsequent generators.

During the first phase of construction, China and Pakistan are not only committed to improving energy shortage problems, but also focused on infrastructure constructions.

Thanks to highways and energy infrastructures, an increasing number of Chinese enterprises have come to invest in Pakistan, effectively promoting Pakistan’s economic development and at the same time, laid down a solid foundation for industrial cooperation in the second phase of the corridor.

Under the framework of the CPEC, China and Pakistan have greatly facilitated inter-regional connectivity through the construction of various infrastructure facilities.

Taking Gwadar port in Balochistan as an example, it is not only one of the four key points of the CPEC, but also a pilot project for the co-construction of the “Belt and Road Initiative” between China and Pakistan.

In November 2016, Gwadar port was officially opened, and from this place, the first Chinese commercial ship set sail. From its humble beginnings as a small fishing village, over years of development, Gwadar port gradually turned into a regional logistics hub. Even during the epidemic period, the construction of Gwadar port continued to advance.

It is worth mentioning that Gwadar Port has also created many “firsts” in 2020: for example, the launch of transit trade through Afghanistan, fully showing its transshipment potential; for the first time, it is expected that 10,000 tons of LPG will be shipped to Pakistan each month through Gwadar Port; and it is the first time where commercial operation was realized.

In July 2020, a medium-sized cargo ship loaded with 16,000 tons of chemical fertilizers docked at Gwadar port for the first time, and completed the unloading, warehousing and storage of all goods, this marks the official launch of Afghanistan’s re-export business.

The changes brought about by the construction of the CPEC are noticeable. According to a 2012 study by PricewaterhouseCoopers, the power shortage has resulted in an average annual loss of $13.5 billion in Pakistan’s GDP.

Since the construction of the CPEC, Pakistan’s domestic power shortage has been greatly alleviated. According to Pakistan’s CPEC Affairs Bureau, as of January 2022, the total capacity of completed energy projects under the CPEC framework has reached 5.32 million kilowatts.

Khalid Mansoor, Special Assistant to the Prime Minister of Pakistan on CPEC, has said that these power capacities have provided a large amount of residential and industrial electricity, relieving Pakistan from long power outages.

The local impact of the CPEC on Pakistan is also largely reflected in the boosting of local employment.

According to some statistics from the Planning Commission of Pakistan, the early harvest projects of the first phase of the CPEC have created about 38,000 jobs, more than 75 percent of which are local employment, with energy projects creating the most employment, absorbing 16,000 Pakistani workers and engineers in total. In addition, the construction of transportation infrastructure has created about 13,000 jobs. Chinese companies are also actively fulfilling their social responsibility when carrying out project construction.

Starting from 2021, the CPEC has smoothly entered its second phase of construction. The development priorities are also gradually shifting to the industrial sector and expanding agricultural cooperation between the two countries.

Pakistan is an agricultural country with a population of 220 million and with a good location, so it is reasonable for the second phase of the CPEC’s construction to focus on industrial cooperation, with a layout that focuses on sectors such as agriculture, manufacturing and textiles. With the joint efforts of China and Pakistan, CPEC’s constructions keep stepping up to new levels.

China and Pakistan are willing to work together to build the CPEC with the goal of higher standards, sustainability and benefit for people’s livelihood, and accelerate the construction of a closer China-Pakistan community of shared future in the new era.